Writing Workshop with Elissa Dickson: Down to Earth 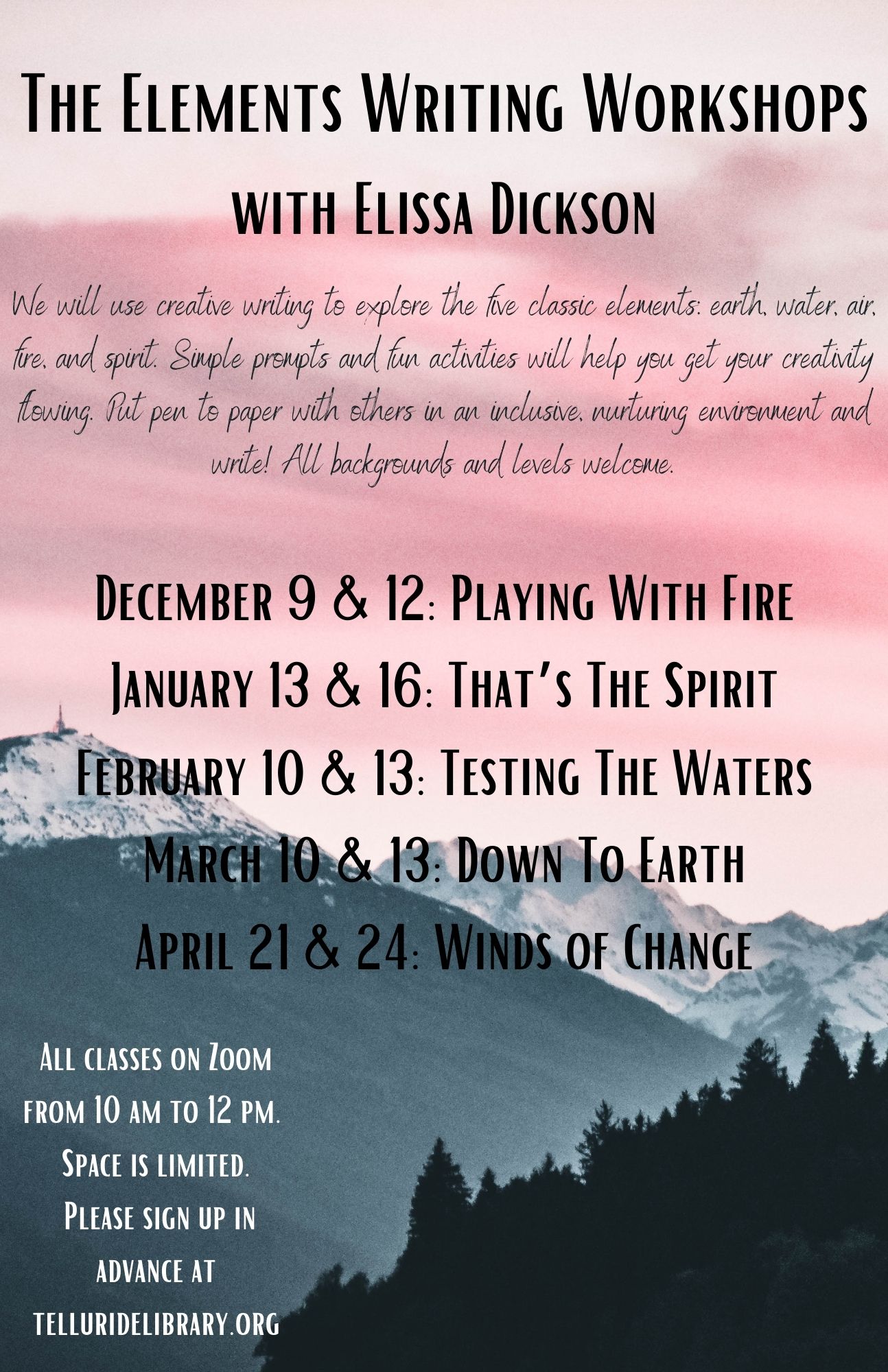 Each class is offered on a Wednesday morning and then again on the following Saturday!
In this five part series, we will use poetry to explore the five classic elements; earth, water, air, fire, and spirit. Ancient cultures around the world, from Greece to Persia and Japan to Tibet believed that these elements made up everything.  Today the five elements remain powerful symbols, artistically, culturally, and personally. Join us in an elemental exploration of what it means to be human.
Simple prompts and fun activities will be used to help you get your creativity flowing. Come put pen to paper with others in an inclusive, nurturing (online) environment and write creatively! All backgrounds and levels welcome.
December: Playing With Fire
January: That’s The Spirit
February: Testing The Waters
March: Down To Earth
April: Winds of Change
“Poetry is a veil in front of a heart beating.” Jericho Brown
“I have never started a poem whose end I knew. Writing a poem is discovering.” Robert Frost
Playing with Fire
Fire takes on many forms; the bonfire, the wildfire, the candle.  Fire takes on many personalities; the destroyer, the inspired, the renewer.  The phoenix rising from the ashes remains a powerful and timelessly relevant ancient myth and symbol. As we pass through the Winter Solstice, join us by the cozy figurative fireside to play with fire!
That’s The Spirit!
“That’s the spirit!” we say to express approval of someone’s attitude. But what is the spirit? Understood throughout history as the animating force of all living beings, it has held many names in many cultures spanning the entire globe. Yet, spirit remains a mystery wrapped in an enigma. Sufi mystic poet Rumi, the best selling poet in the U.S. today says, “open the window in the center of your chest, let the spirit fly in and out”. As the New Year begins and the light returns, join us on an exploration of spirit.
Testing the Waters
Water embodies vitality, purification, and wisdom. While oceans speak the language of infinity, rivers speak the language of impermanence.  From skiing to ice skating, the winter activities we love allow us to “walk on water”. As the San Miguel babbles on under a frozen surface, join us under snowy skies to test the waters!
Down To Earth
Earth represents fertility, stability, and rebirth. Embodied in the grower, the mother, the home; the earth element speaks to our practical, grounded, nurturing side. With the days lengthening, the time is fertile for envisioning what seeds we’d like to plant for the coming season. As spring sprouts in our minds, join us to dig our hands down into the earth.

Wind symbolizes many things including breath, voice, and the invisible force of change.  Always elusive, wind can whisper and howl, shape and sculpt.  As the spring wind blows in the red rock desert and the snow-tipped mountains, join us to reflect on the winds of change!