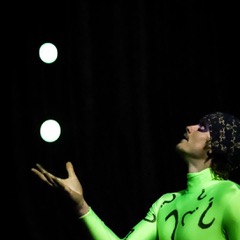 Juggling Mastery Class! This one-hour class will go over fundamental juggling techniques that will help you learn tricks ranging from beginner to advanced levels. You will learn the methodology needed to break down any juggling trick so that you can learn efficiently and effectively. We will go over ball, club, and ring juggling and will set you well on your way to juggling mastery! This class will be a lot of fun and will give you the tools you need to achieve whatever juggling goals you have. Whether that be performing on stage, impressing your friends at a party, for your own mental health, or using juggling as currency, this class will get you there!
About the instructor: A circus artist originally from Portland, Maine, Jesse Shavel has been performing and teaching juggling professionally for five years. Jesse's primary discipline is juggling but he trains in a variety of different circus arts including cyr wheel, unicycling, stilting, rolling globe, and partner acro. Jesse's been juggling for over 20 years now and is one of the few people around to ride a 7ft unicycle and juggle flaming torches at the same time. Jesse began teaching and performing in Little Rock, Arkansas, in 2016, where he started his career with Arkansas Circus Arts. He has been in the circus world ever since and currently is based out of Denver, Colorado.