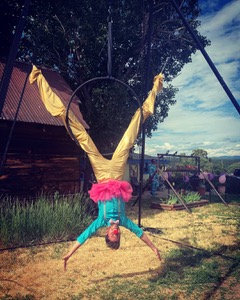 Moving on up: an introductory course to Stilts with Ben Dukeminier!
In this free one-hour class, you will learn the first couple of basics to circus stilts such as falling and walking. This class is perfect for anyone interested in getting into stilts, those wishing to better their balance or wanting to push themselves outside of their comfort zone. It is recommended you bring your own protective gear for your own comfort reasons; however, knee pads will be provided for those who do not bring their own. So, come hit that growth spurt you've always wanted so you too can be the tallest person around!
About the instructor: An actor turned clown, Ben Dukeminier has been in the performing arts for over 15 years. He is one of the founding members of the "Secret Circus Society" in which he trains in a multitude of skills such as aerial silks, street magic, clowning, rolling globe, playing with fire, juggling, and the list always seems to be growing, but he is best known for his work on stilts. He prides himself on not being just a stilt walker but instead a stilt dancer who like to climb mountains, dance above the crowds & push the limits of what a 10-foot-tall person can do!