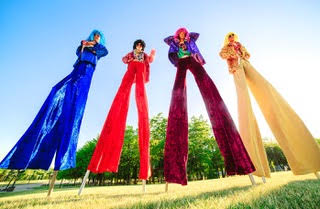 Clowning around: A crash course in FUN!
Have you ever wanted to run away and join the circus? Have you ever felt or been called a clown and want to embrace that title? Or perhaps you wanted the free red nose?? Well, look no further than this fun-focused class, where we will dive into what it truly means to be the fool. In this wacky workshop, we will play with a plethora of props in a rapid round robin rotation and snicker during some silly classic clown shenanigans. Guaranteed fun for any age or skill level. Oh... and did we mention the free red nose?
About the instructor: An actor turned clown, Ben Dukeminier has been in the performing arts for over 15 years. He is one of the founding members of the "Secret Circus Society" in which he trains in a multitude of skills such as aerial silks, street magic, clowning, rolling globe, playing with fire, juggling, and the list always seems to be growing, but he is best known for his work on stilts. He prides himself on not being just a stilt walker but instead a stilt dancer who like to climb mountains, dance above the crowds & push the limits of what a 10-foot-tall person can do!