Ali Delgado: My Race for Life Talk and Signing 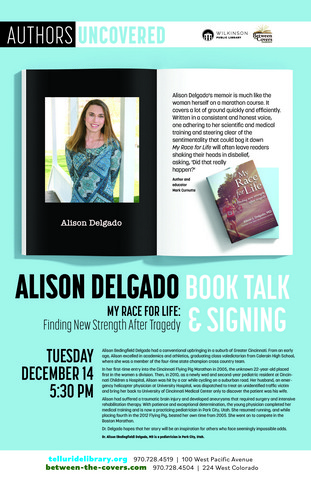 Come to a book talk and signing and hear Ali's amazing story of survival, medical miracles, perseverance, and finally... thriving.
Alison Bedingfield Delgado had a conventional upbringing in a suburb of Greater Cincinnati. From an early age, Alison excelled in academics and athletics, graduating class valedictorian from Colerain High School, where she was a member of the four-time state champion cross country team.
In her first-time entry into the Cincinnati Flying Pig Marathon in 2005, the unknown 22-year-old placed first in the women s division. Then, in 2010, as a newly wed and second-year pediatric resident at Cincinnati Children s Hospital, Alison was hit by a car while cycling on a suburban road. Her husband, an emergency helicopter physician at University Hospital, was dispatched to treat an unidentified traffic victim and bring her back to University of Cincinnati Medical Center only to discover the patient was his wife.

Alison had suffered a traumatic brain injury and developed aneurysms that required surgery and intensive rehabilitation therapy. With patience and exceptional determination, the young physician completed her medical training and is now a practicing pediatrician in Park City, Utah. She resumed running, and while placing fourth in the 2012 Flying Pig, bested her own time from 2005. She went on to compete in the Boston Marathon.
A couple of years later, Ali's husband Tim, transitioned to become her wife, Taylor.  Another major event in the life of the family that they also embrace with grace, love, and perseverance.

Dr. Delgado hopes that her story will be an inspiration for others who face seemingly impossible odds.   She is currently a practicing pediatrician in Park City, Utah.